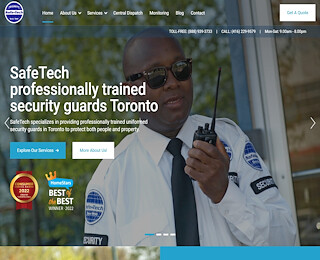 Petty crime is on the rise throughout the country, including the city of Toronto. If you run a business, you are at risk of burglaries, theft, vandalism or having your clients assaulted. While police ultimately have to deal with them, they can’t respond in time to prevent damages. This is it’s up to you to protect your own assets with private security.

Getting Rid of Vandalism

If you live in a high-crime area, chances are vandalism during the night is a nagging problem. Not only would damages add to your overhead, but it can also ward off potential customers. This is why many businesses here will have private security in Toronto to mitigate it.

On average, small businesses will have to pay over a few thousand dollars out of pocket for each act of vandalism. If this happens on a regular basis, this will cost much more than hiring a part-time private security guard. With also the perceived threat of violence against customers or employees, that alone makes it worth the investment.

It’s not just convenience stores or retail that have to worry about vandalism. Tech companies, educational institutions or government offices also have the threat of computer vandalism. When the general public close access to computer equipment, it would help to have private security in Toronto to keep an eye out. This could include installing viruses, stealing files or intentionally damaging hardware.

Theft can occur in multiple ways, from non-violent shoplifting to armed robbery. Having an authority figure standing watch will mitigate these from occurring drastically, often requiring no conflict at all. This is why hiring private security in Toronto is the bare minimum to prevent losses.

A security company may also help with installing and monitoring security cameras and alarm systems to prevent nighttime burglaries. Since criminals like to go after the low-hanging fruit, being the only business in the area without some sort of security features will make you a target. Security guards are usually trained to think during last-minute situations, so its good to have a few of them around to cover security breaches.

One problem businesses face, and especially the likes of convenience stores, are non-customers that gather around to socialize, ask for money or promote their business and such. This type of behavior can discourage potential customers, which is why it’s useful to have someone to ask them to leave.

In a retail environment, security guards serve more than intimidation for troublemakers. They can also greet customers, provide help for people locating things and generally be available for things needed at the front desk. They can also be useful for keeping the parking lot safe for paying customers when it’s nearing closing time. Since your security guards are placed at entrances or exits, they are the face for your company.

Hiring private security in Toronto would probably be an inevitable choice as businesses in large cities are seldom spared from crime. If you are interested in having a professional company handle your security affairs, give us a call to learn about our services.